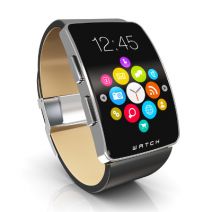 You’ve probably seen the new fancy-schmancy watches that some people wear and wonder to yourself, “What’s so special about them?” Smartwatches like these are considered wearable technology and are typically meant to perform the various functions of a smartphone, minus the phone. Some devices are even used to monitor the body’s physical activity with health apps. They might seem useful now, but what’s the endgame for wearable technology?

What is Wearable Technology?
Technically, just about any device that’s worn on the body (like a headset) can be considered wearable technology. However, most wearable devices that you’ll encounter are designed to do one (or both) of two things: 1) Monitor the body’s physical well-being and track health progress, or 2) provide efficient access to apps that are designed to enhance productivity and efficiency for office employees. While they initially were meant for more of the former, the incredible success of wearable technology inspired developers to improve functionality in other areas.

A 2014 Parks Associates study projected that smart watch sales will reach 121 million units worldwide by 2018. Similar to a smartphone or smart TV, a smart watch can connect a user to the Internet for access to real-time data. Generally, smart watches will offer users some basic features (current weather, music, access to email and texts, etc.), which are also available on smartphones. Depending on the model, some folks can use their smart watches to control their smart TVs, capture pictures, video chat, and run scaled-down versions of common smartphone apps, in addition to using the device as an activity tracker.

While wearable technologies are versatile and can be used for multiple tasks, this doesn’t mean that these devices will be practical in the near future. For example, which would you rather use for your smart technology experience: a smartwatch or your smartphone? Many would probably say the smartphone because it’s vastly more powerful and efficient compared to the smartwatch. A larger screen makes it much more viable to get work done on a smartphone, rather than on a smartwatch.

Another type of wearable gadget consists of smart glasses, like Google’s failed Google Glass product. The main issue here is privacy; having a camera readily available on your glasses is somewhat sketchy and reminiscent of cyber espionage. Thanks to the portability afforded to smart glasses, they were thought to be a threat to both personal privacy and data security, so the idea never really took off.

How Wearables Affect Your Workplace
When workers are using wearable technology in the workplace, you should practice considerable caution. The trend known as Bring Your Own Device (BYOD) coupled with the Internet of Things (IoT) can spell trouble for businesses that aren’t prepared to deal with new devices connecting to their private networks. Any Internet-connected device can be considered a threat to your business if it’s not managed and maintained by your company. This is why it’s so important to keep an eye on devices that your employees are bringing to work with them. One way you can set these fears aside is by implementing a mobile device management solution, which gives you the ability to remotely wipe managed devices, restrict access to information on an app-by-app basis, and so much more.

Don’t let wearables and other Internet of Things devices hold your business back. To find out more information about how NuTech Services can protect your business from these new threats, give us a call at 810.230.9455.