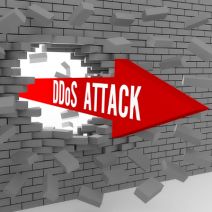 Direct denial of service attacks are a major problem for businesses. On one hand, they’re difficult to prevent entirely, incredibly annoying, and costly. Hackers are realizing just how annoying DDoS attacks can be, and are capitalizing on them in order to both make a quick buck, and to take jabs at organizations that aren’t necessarily doing anything wrong.

When a business is targeted by a distributed denial of service (DDoS) attack, their servers are overloaded with traffic and brought down by the sheer amount of activity, usually performed by botnets (compromised computer hordes). This is a massive inconvenience for both end users and the business owner. Your workers lose access to critical files and applications, which becomes a cause for expensive and dangerous downtime.

One of the most frightening things about DDoS attacks is that practically anyone can truly pull one off. There have been stories about lone wolf hackers and random kids pulling off DDoS attacks under the right circumstances.

DDoS attacks are designed to cause massive headaches and downtime, but you don’t have to live in fear of them. Here are two ways you can make the next DDoS attack you experience less painful.

Understand Your Network
Before assuming that you’ve been the target of a DDoS attack, you should first familiarize yourself with the normal quality of your network. By doing so, you’ll more easily be able to detect any strange occurrences that may be causes for concern. If it’s business as usual, you have little to fear.

Keep in mind that while this is helpful for DDoS attacks, it can be a good first step toward diagnosing many common issues with your network. If something feels out of place, chances are that there’s something going on behind the scenes. A quality IT technician can help you further correct problems associated with your network.

Be Ready
While DDoS attacks are seemingly unpredictable, this doesn’t mean that you shouldn’t be prepared for them. You should start by identifying what your critical systems are, and take measures to ensure their operation continues, even in the face of the worst circumstances. Are there any services that can be hosted off-site? While it helps to have all of your services hosted in-house, your server will likely be the target of a DDoS attack; therefore, it makes sense to host your critical business systems elsewhere, like in a secure, off-site cloud solution. Although you run the risk of the data center getting hit by a DDoS attack, most data centers have the resources and safeguards to reduce downtime caused by them.

Regardless of the business type, you should never dismiss downtime as an acceptable issue, and you should always do whatever you can to mitigate your losses. Contacting IT professionals like those at NuTech Services can go a long way toward limiting downtime caused by all types of threats, including DDoS attacks.

For more information about how you can fight against DDoS attacks, give NuTech Services a call at 810.230.9455.