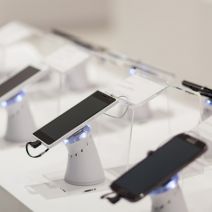 Smartphones are firmly established as a staple of modern society. In fact, sales of smartphones grew a whopping 23 percent during the previous year. It’s the nature of mobile devices for consumers to look forward to the latest models. To that end, here’s our preview of this year’s top three smartphones.

Due to the sheer demand of smartphones flooding today’s market, there are way more than three models to choose from. However, for the sake of being concise and relevant, we’ll focus on the flagship device from these three mobile manufacturer; Samsung, Apple, and Microsoft.

Samsung Galaxy Note 5
Samsung has taken the lead as far as smartphone marketshare goes, garnering 24.6 percent of the market in 2014. They’ve achieved this success with their line of s-model phones and Note phablets. All eyes are on Samsung and its latest offering, the Galaxy Note 5.

iPhone 6s
The iPhone has been Apple’s best-selling device for almost 12 years, and the iPhone 6s looks to continue this trend. The latest iPhone will include an all-new A9 processor, designed to exceed in computing power Samsung’s Exynos 7420 processor. It’s also been confirmed that the iPhone 6s will get an upgrade to its body. Presumably, this will make it stronger and more durable, especially in light of how the previous model was ridiculed for bending too easily. Additionally, the iPhone 6s will have a larger display than the iPhone 6.

Lumia 940
Microsoft recently acquired Nokia and its line of Lumia smartphones. Despite the fact that the Lumia phones have received great reviews, they’ve never made the kind of sizable impact that Microsoft would have liked. Thanks to the success of the newly-released Windows 10 OS (a system that promises one single interface across every device, including the Lumia smartphones), the time may be ripe for Windows Phone to finally take off.

These three smartphones are the flagship devices sold by each manufacture, but they’re not the only devices offered by each company. If you like what you see here, but you’re looking for variations in regards to features, check out these alternative models:

Which smartphone is right for you? While you’re sure to have personal preferences toward a particular brand, it’s in your best interest to do your due diligence when shopping for a new phone so you can obtain a model that best meets your needs. Want to know about how mobile technology like this can improve your business? Call us at 810.230.9455 to learn more.