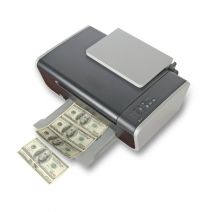 When a print job doesn’t go exactly how you need it to, it’s normal to call your printer some choice words, which may include one of the many colorful synonyms for excrement. Perhaps this stems from a printing network and a toilet having a lot in common. How’s that you ask? Let’s clear the air and find out.

One major similarity between printers and toilets is that they both utilize connected systems. All of your printers are connected to your office’s server units, which in turn connect to your workstations and various devices. Likewise, all of your building’s toilets are connected by a series of pipes leading to one main pipe that exits your building. Just as multiple computers share the same printer, so too do multiple toilets share the same drain. In each example, both the printing signals and the flushed waste all go to one place.

What’s also true of each system is that they’re both susceptible to being overwhelmed. You’re familiar with what happens when your plumbing takes on more than it can it handle; the pipes back up and the contents of the toilet runneth over upon thy floor. At the risk of grossing out our readers, we will refrain from describing what this plumbing problem looks like.

It’s the engineer’s responsibility to design the plumbing system to handle the demands of every toilet–even if they all flush at the exact same time. In fact, for large structures housing hundreds of toilets, like sports stadiums, there’s a ceremony called a “super flush” that takes place before the stadium is opened. In a super flush event, the stadium’s plumbing systems are put to the ultimate test as hundreds of fans simultaneously flush every toilet.

As wacky as this sounds, a super flush has become a celebrated sports tradition. In 2011, Florida Atlantic University hosted a super flush to christen their new stadium. As seen from this video, the event meant sweet relief for the University’s administration as over 100 volunteers reported for duty and successfully flushed all 365 stalls. Go Owls!

Can your company’s network handle a virtual super flush? More commonly referred to as a virtual peak flow test, this is when a network is tested in order to find out how much traffic it can handle. This is a necessary and standard procedure when setting up any network. If your network can’t handle peak traffic, it will fail and cause downtime at the worst possible time, similar to a stadium’s plumbing failing during a playoff game.

Did you know that printing data sent over the network takes up significantly more bandwidth than the average office task? Unless you’ve got plenty of bandwidth to work with, it will be disastrous if every employee in your company clicked “print” at the same time. A network overload like this will cause print jobs to back up, along with your normal network traffic, causing a crash. You would need much more than a mop to clean up a mess like this.

To ease this burden from your network’s server units, NuTech Services offers a print server solution. This solution acts as a dedicated server to handle all of your company’s printing traffic, bypassing the need to run a print job through your regular server units that handle your company’s mission-critical, day-to-day operations.

A print server from NuTech Services will ease a lot of pressure off your company’s server units, which will free up bandwidth for work-related tasks so they can function at high flow speeds. Plus, it will make your printer operate smoother so that you’ll have less reason to get mad and call it something you’ll later regret.