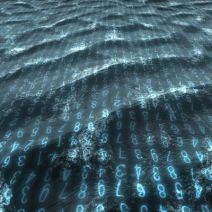 Many countries around the world have access to the Internet, but have you stopped to consider how this service is deployed and connected to countries on different continents? Well, this is only made possible by the countless miles of wire laid beneath the surface of the ocean, all around the world. In fact, it’s somewhat unnerving to think that international communications depend on the structural integrity of cables submerged at the bottom of the sea.

Like a mighty sea serpent, the Internet’s cables snake around the globe, connecting countries and online infrastructures to ensure global communication. The majority of transoceanic communications, including phone calls, emails, and just about any Internet transmission, is dependent on the well-being of these cables. As reported by WIRED, the first telegraph wire was initially laid across the Atlantic Ocean in 1866, and others soon followed, laid across common trade routes. In the 1950s, the standard for overseas cabling shifted to coaxial cables, which were capable of carrying telephone conversations. Today, the world uses fiber-optic cables that are used to transfer enormous amounts of data relatively quickly.

Here’s a video of how these cables are laid:

And a map of where they’re all located:

As you can expect, these Internet cables have become important staples for how society communicates on an international scale. Still, doesn’t it seem strange that such important pieces of technology are left at the mercy of the ocean? Most people don’t bother to remember that the cables exist until a problem happens and a connection goes down. More often than not, people only take interest in the cables when something goes wrong with them, but it’s a fairly common occurrence for submarines and international powers to take an interest in them.

As reported by WIRED, the following problems are fairly common threats for the Internet cables: seismic activity, various undersea creatures (namely sharks – you know, the scary ones with teeth), and international intervention. By far, though, the most common problem for the undersea cables comes in the form of ship anchors and fishing nets. Between the two, they make up about 60 percent of all cable destruction. This is the primary reason why most sea charts will mark the location of these wires; since, as you can imagine, cutting them has some pretty dire consequences.

Cutting undersea cables would probably make for a great sabotage trick for an international conflict, but such activities haven’t occurred since the previous World War. These days, the cables are typically left untouched and forgotten about, though occasionally the media will make a scene about submarines sniffing around near the cables. What are your thoughts on these undersea cables? Do you think there should be a more efficient manner of deploying information across the world? Let us know in the comments.