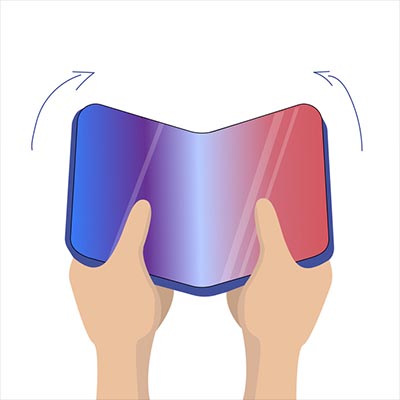 OLED Foldable Screens
Compared to the traditional light-emitting diode (LED) displays, OLED devices are a step in the right direction. LED technology works by emitting light from the electricity that circulates through it (a process called electroluminescence). The electrons in the semiconductor recombine with electron holes, releasing energy in the form of photons. The color of this light varies depending on how the photons cross the energy gap of the semiconductor.

OLED displays work through an electroluminescent anode that is made of an organic compound situated between two electrodes. The electrodes move and recombine, emitting light through the organic layer. OLED displays deeper black levels that aid in image contrast. These devices can be made much thinner and more flexible than your traditional LED devices.

Over the past five years, manufacturers have made considerable progress toward OLED displays. Some have utilized passive matrix designs or active matrix designs to great effect. The major difference between these two is that PMOLED has control over each line of pixels sequentially, whereas AMOLED displays have a transistor that accesses pixel function directly.

Bendable Displays
The organic compounds in the OLED anode allows for a much easier manipulation compared to other designs, as long as the transistor used to carry the energy is flexible, too. Once this was confirmed to work as intended, scientists had to find a substrate layer that could flex without breaking. This is why glass isn’t used in flexible screens. Some particularly flexible OLED displays contain a plastic substrate that gives them strength and flexibility required to become a foldable device.

Foldable Options
Motorola and Apple have rumored to be producing foldable smartphones in the near future, but there are others that are taking more immediate advantage of this technology. Here are a few of them.

In just a week, on April 26th, 2019, the Samsung Fold will become the first foldable smartphone to reach the U.S. This device can reach 5G speeds and sports an impressive foldable screen. The screen unfolded reaches 7.3 inches with a dynamic AMOLED display, while it reaches 4.6 inches folded with a super AMOLED display on the front of the phone. The innards are also quite impressive, featuring a 64-bit octa-core processor with 12 GB of RAM, 512 GB of internal storage, and a 4,380 mAh battery.

Chinese manufacturer Huawei is providing a foldable smartphone in the form of the Huawei Mate X. The foldable display isn’t actually protected, but it is used in a way that differs considerably from the other options. With a foldable component that wraps around the device, the Mate X has a viewfinder that helps with taking pictures. This means that there is no need for a front-facing camera on this device. Other specs for this device include a Kirin 980 octa-core processor with 8 GB of RAM and 512 GB of onboard storage. This device also has a 4,500 mAh battery with a 55W fast charging standard. This product will be available in the near future, so keep an eye out for it if foldable screens are what you’re looking for in a device.

What do you think about OLED technology? What about foldable screens? Let us know in the comments.