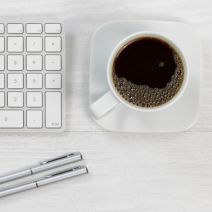 The road down entrepreneurialism is a long and twisted path, full of pitfalls that can lead you astray. However, there’s one companion who will never forsake you, and that’s your morning cup of coffee. While you might feel like you can’t get anything done without your morning caffeine fix, it can be holding you back from achieving your maximum productivity.

Giving up on caffeine can be a life-changing experience, but some are more reliant on it than others. It might seem like caffeine’s benefits vastly outweigh its negatives, but when it comes down to it, caffeine’s benefits are only temporary, saddled with side-effects.

What Exactly Does Caffeine Do to Your Body?
A study performed by the John Hopkins Medical School has proven that, despite caffeine’s negative side-effects, it has been proven to increase task performance and cognitive ability, but only temporarily. The main issue with caffeine is that there’s no way to reap the benefits of that cup of coffee without experiencing caffeine withdrawal almost immediately afterward. Because of this, the user goes straight for the coffee pot time after time. This eventually links performance to the amount of caffeine ingested, which limits cognitive function when without it.

To make matters worse, caffeine induces an adrenaline rush, not unlike the response you receive from a life-threatening situation. This is what’s known as the “fight or flight” syndrome, which triggers emotional responses to defend the self from harm. Naturally, you can imagine how horribly wrong this can go when responding to critical emails at a time where you lack sleep and are thriving off of caffeine.

By the end of the day, you’ll feel exhausted and ready for bed; but despite how tired you are, you’ll find it difficult to sleep. This is because caffeine has a six-hour half life. According to Inc:

Have a cup of joe at 8 a.m., and you’ll still have 25 percent of the caffeine in your body at 8 p.m. Anything you drink after noon will still be at 50 percent strength at bedtime. Any caffeine in your bloodstream–with the negative effects increasing with the dose–makes it harder to fall asleep.

This makes it extraordinarily difficult to get good, quality sleep, and even harder for the brain to catch up and restore its energy. When you wake up exhausted, you naturally go right for the cup of coffee, leading to even more withdrawal later in the afternoon.

Caffeine’s Side Effects
Caffeine is well known to produce several adverse side effects when users are going through withdrawal, all of which can be harmful to your cognitive ability and health. According to Inc, they are:

The side effects of prolonged caffeine use aren’t limited to just these, though. These are simply those that affect the cognitive ability to function, which is arguably the most important part of the workday. It’s well known that caffeine can induce uncomfortable problems like frequent urination and gastrointestinal anomalies, as well.