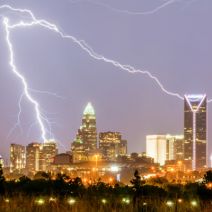 When you store your data in the cloud, you assume it will be safe and that nothing bad will happen to it. But what if the real clouds hovering above your virtual cloud are literally full of lightning? Google experienced this last month when one of its data centers in Belgium fell to the wrath of Zeus.

Maybe the Greek god of lightning was insulted by a video of him uploaded to YouTube? It’s hard to know for sure the cause of the strike, but what we do know is that the charred data center is primarily used to host Google’s Cloud Platform, and on that fateful evening it sustained four consecutive lightning strikes, one after another.

As terrifying as a lightning strike sounds, for Google, the scariest part of the whole ordeal was that five percent of its disks in the center could no longer read or write data, equating to a loss of 0.000001 percent of the center’s total data. Regarding this data, Google issued a statement saying, “In these cases, full recovery is not possible.”

Such a small amount of data lost may not sound like a big deal, but that’s because it wasn’t your data that was lost. When it comes to data, you don’t have to have your entire infrastructure wiped out for your bottom line to be hurt. Instead, all it takes is a fraction of your mission-critical files to be erased for your entire workflow to be thrown off. Therefore, it’s crucial to have a backup and recovery plan in place for all of your files.

One would assume that a giant company like Google with such deep pockets would have taken precautions in order to prevent something like this from happening. To Google’s credit, they do have safeguards in place to protect themselves from regular lighting strikes (a common occurrence for data centers), but nothing could have prepared them for this quadruple-electric whammy.

Despite the obscene chance of this ever happening again (you know what they say, “four consecutive lightning bolts never strike the same data center twice”), Google has assured its users that they’re making upgrades to prevent any future incidents of this nature. Although, we’re sure that even the best efforts of Google will be puny and ineffective compared to what the mighty Zeus can dish out!

Contact NuTech Services at 810.230.9455 for a Backup and Disaster Recovery solution that will protect your company’s data from everything on this side of Mount Olympus.