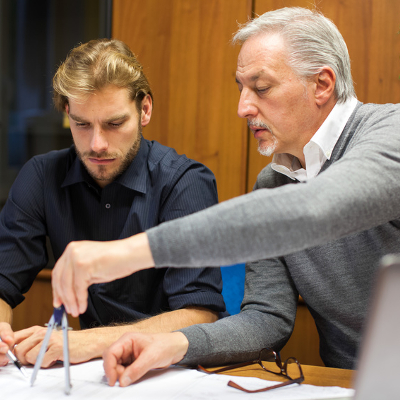 There are over 83 million millennials in the United States. That is one out of every four Americans; and, now the most populous generation of people in the U.S. are all of working age. It is not a surprise, then, to find out that there are more workers who were born between 1981 and 1997 in the United States than any other generation. Millions of new workers for the modern economy that continues to grow.

A problem has come to light, however: the workers they would typically replace aren’t finished just yet. For the modern worker there are fewer opportunities to save money, and as a result, people are working longer and longer. What happens when young workers clash with the workers who have been in the trenches for decades? What specific issues do they have trouble with? We’ll look at this phenomenon and try to identify ways your business can limit generational strife among workers.

The Millennial Mindset
While only a few can definitively say that their job was great before millennials came along and ruined it, there has been a major shift in the type of work that companies do; and, the way that work gets done. Moreover, there is a shift in the way that these new workers (millennials) look at their job’s role in their life. People can argue about the viability of it, or the justifications behind it, but “The Millennial Mindset” (as it is sometimes referred to) has grabbed the business world’s attention as millennial workers demand more from a business than any other generation of American workers in history.

The millennial mindset, to explain it simply, is one that embraces flexibility, innovation, connectivity, collaboration, and most of all, transparency. This can cause conflict with older workers who have been plugging away for decades and have a routine method to work. Both the millennial’s perceived lack of respect for traditional constructs, and excess of pride in their own abilities can often set the stage for conflict. Since millennials have spent their formative years surrounded by technology, they tend to take for granted that they’ll have access to it at all times. Other generations have adapted to the use of technology and, as a result, often avoid it whenever possible. While technology has allowed people near-ubiquitous access to information, simply having access doesn’t make people experts.

Millennials also seek flexibility with their time, tending to leverage technology into jobs that feature access to remote work and flexible schedules. Like many of the workers before them, they want to be mentored, but can often rebuff potential mentors. They often seek for quick promotion, or at the very least, demand say in how they approach their jobs. Those that find it difficult to have their ideas taken seriously, or that feel underappreciated at work, are willing to look for other opportunities and explore their options. Since the workplaces of today have changed, largely as a result of technology, it really isn’t all that surprising that the people most proficient in the use of this technology are in high demand.

What’s the Problem?
Generational conflicts are nothing new. Young people of every generation have always been seen as a problem in America; but, those young people age. As older people, they then take issue with the next new generation of young people. That’s not to say there aren’t major differences between this particular set of people, but by-in-large, people will always squabble with people younger than them because young people generally are far more ambitious and less interested in convention. As useful as it is, the current generational friction in the workplace has been exacerbated by business’ reliance on technology.

Older workers tend to take exception to the millennial’s “me first” attitude, even if that attitude is based in an optimistic view of the work they are doing. Generation X-age workers tend to understand the world the millennial comes from a little bit better than Baby Boomers do, but since, as a whole, Gen-Xers tend to view the world, and people’s motives, through skeptical eyes, their motivations are typically their own.

One of the major problems you will see among your workforce is a misunderstanding on how each generation communicates. In a study performed by Robert Half, managers were asked “In which one of the following areas do you see the greatest differences among your company’s employees who are from different generations?” The results:

What Can You Do?
You’ll have to consider two major steps if you hope to get them on the same page. The first is simply understanding that no matter what generation a worker is from, they are all individuals that you are asking to work with others for a purpose. While older workers may respect you for looking at the bottom line when making decisions, younger workers may not as often, so leveraging the options you have at your disposal (pay increases, more time off, flex schedules, etc.) is always going to be a good strategy.

The second step is to follow a relatively simple four-step plan to get the most out of all of your workers. The four steps are as follows:

By following these steps, you will prove to your staff that you are committed to understanding what exactly every person is after. Using these principles can also help you ascertain which among your staff is ready for more responsibility, and which members of your staff may just not be a good fit to keep your organization working productively.

What do you think about generational conflict in business? Do you consider it a major hurdle to success, or just a blip on the radar? Leave your thoughts in the comments section.