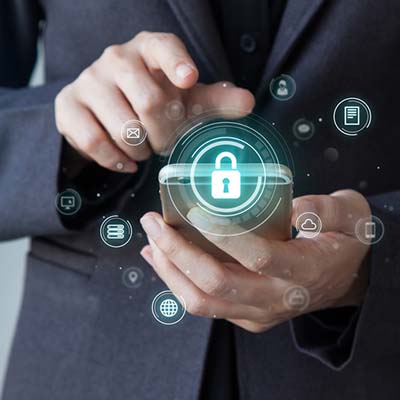 These days everyone has a smartphone; and, they can do some pretty incredible things. One place that the average smartphone may seem to be a little loose is in the arena of data security. Today’s smartphones do, in fact, come with encryption by default, so there is some semblance of device security on every device. What does this mean? We’ll break it down.

“Smartphone encryption” describes the state in which the data on the device is scrambled so that people that don’t have the proper security clearance, won’t be able to see the device’s contents. While this is extraordinarily helpful for device security and personal privacy, it has nothing to do with protecting actual data transmission.

Without entering the credentials or biometric data that allows for a device to open, many of the features a device has are not able to be accessed. In fact, most modern smartphones won’t actually connect to a Wi-Fi network without the proper credentials. This is handled differently on the different mobile platforms.

Apple
The iPhone ships with 256 AES encryption. It is not stored on the phone (which could result in more successful hacks), a correct passcode combines with data stored on the Secure Enclave chip to generate a key that unlocks the device. This chip also holds biometric data (fingerprint and facial recognition) that can be used to open the device or use Apple Pay. Any Apple product that is repeatedly unsuccessfully opened will lock, stopping unwanted parties from getting into your iPhone.

Android
Since so many more people use the Android mobile OS, Google did not make device encryption standard until devices that run their Android 6.0 Marshmallow mobile OS. If your new Android device runs 6.0 Marshmallow or better, it now ships with encryption enabled. Since Google’s implementation of encryption depends on the manufacturer, some phones will use a key generation system similar to the iPhone’s, while others will use a more complex system called file-based encryption. File-based encryption allows for varying levels of decryption and provides unauthorized users access to a limited number of the features on the device.

In the News
Over time, there has been a push for mobile OS developers to build in “backdoors” to ensure that law enforcement can get into a device if/when they need to. Companies like Apple, Microsoft, and Google have had to field their fare share of criticism, but strongly defend their position. Apple CEO Tim Cook states the following, “In the physical world, it would be the equivalent of a master key, capable of opening hundreds of millions of locks – from restaurants and banks to store and homes. No reasonable person would find that acceptable.”

Encryption is for your benefit. If you would like more information about modern digital cryptography or any other mobile security, visit our blog.