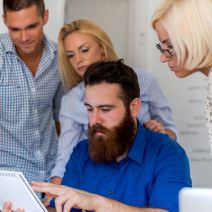 Running a business means going to meetings. There’s really no way around it. And while you can’t run a business without meetings, you can run your meetings as efficiently as possible so that they’re not a complete waste of time. Unfortunately, according to a recent study by Blue Jeans Network, the worldwide trends for meetings show that they can hinder productivity more than help it.

The study is an annual report released by Blue Jeans Network, a cloud-based video conferencing company. They analyzed the data from more than five million video meetings in 177 countries, of which more than a third had an in-person component. When compared to similar studies done from previous years, patterns were spotted that showed people are wasting more time in meetings than they should. Here are a few of the more noteworthy findings.

Most Meetings Are Taking Place at the Most Unproductive Time
In separate studies, it’s been proven that different parts of the work day are better for meetings. For example, morning meetings are ideal because that’s when people are most alert, and the worst time for a meeting is in the middle of the afternoon because that’s when office workers tend to feel the most dull-brained. According to the study, the most popular meeting time is mid-afternoon, sometime around 3 p.m.

Solution: Schedule your meetings during the mornings, preferably right after the coffee kicks in.

It’s Normal For Meetings to Start Late
One of the most annoying aspects of meetings is waiting for people to show up. While waiting for Johnny-come-lately to make an appearance, everyone is forced to participate in small talk–and get paid for it. This kills productivity. According to the study, a whopping 81 percent of meetings start late, up 30 percent from the previous year. Inc. describes how tardiness is dangerous because it’s a self-perpetuating problem:

If you arrive five minutes late to a meeting and it hasn’t started yet, you’ll figure you haven’t missed anything, so you’ll likely do the same next time, or maybe show up even later. Meanwhile, the punctual people who’ve sat around waiting for you will figure they have better uses for their time, and next time they’ll come five minutes late as well, or maybe even later.

Solution: Be strict about your meeting times and have consequences for late comers.

Bad Weather Equates to More Meetings
The study shows that Winter, with all of its blusteriness and bitter cold, sees twice as many meetings as other times of the year–when it’s presumably warmer and nicer outside. It’s also the case that, the worse the weather is, the more likely that a meeting will take place. The study shows that “meetings were up by as much as 26 percent during the recent Texas flooding, and an impressive 35 percent during the Boston blizzards last winter.”

Solution: Consistency is key to not wasting too much time during meetings, and to not have unnecessary meetings. By having regularly-scheduled meetings, you will decrease the number of unnecessary meetings that take place, simply because someone feels a strange connection to the weather patterns.

Meetings are kind of a necessary evil, but if you plan them right, you can make them more productive and less, well, evil. In addition to being on time and intentional about how often you meet, you can take advantage of technologies like video conferencing and cloud-based scheduling software that will keep your meetings as productive as possible. To schedule a meeting with NuTech Services about this, give us a call at 810.230.9455.