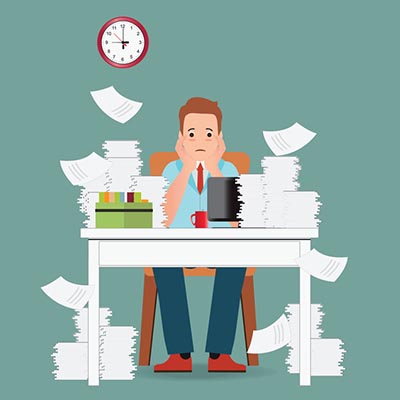 Productivity is a key facet to our success. However, many offices seem to have an environment that focuses more on keeping busy than it does being productive. While they often intersect, these two statuses are very different. Here’s why.

A Rose by Any Other Name
Frankly, it’s pretty easy to observe that “busy” and “productive” are anything but synonymous. We all know those people who seem to be constantly running around, working on this or that. Are these people busy? Certainly. Are they actually accomplishing anything? Maybe, maybe not.

Look at it this way – you can be ‘busy’ doing anything. However, in order to be ‘productive,’ you need to actually produce something. It doesn’t matter if it’s a completed sales proposal, an email explaining away the confusion around a particularly convoluted subject, or… anything else, really, as long as it helps to advance the business’ goals.

The Inherent Issue in Comparing the Two
Unfortunately, much of our context for determining between busyness and productivity comes from the least objective source there is – our own perception.

This illustrates two considerations: how much different productivity really is than pure busyness, as well as how similar they have the potential to be. In order to keep from fooling yourself into thinking you’re being productive when you’re really just looking busy, try asking yourself a few questions as you commence.

For example, you can take a look at how you spend your time, and compare it to what your responsibilities really are at their core.

For instance, let’s say that Bill’s job was to ensure that the company remained secure. If Bill was able to complete all of his day’s tasks in the morning, but then spent the rest of his day reading things online, what would that be considered? Well, that depends. If Bill was reading the latest Bowling Enthusiasts Weekly articles at his desk for the rest of the afternoon, that’s hardly productive. However, if Bill was researching improved cybersecurity practices to enact in the company… that’s a pretty productive way to spend the time.

A Few ‘Keeping Busy’ Red Flags
Of course, none of the following activities have to be time-wasters, they just happen to be in most situations, or require a very specific job responsibility to be considered productive. For instance, many job responsibilities don’t actually require the Internet to be used, so any time spent on it is arguably a waste. The same can be said of social media, and especially email.

Of course, there are also many exceptions to this rule. In essence, you have to use your best judgement, evaluating if a given activity is actually the best use of your time or not.

Don’t forget, NuTech Services has plenty of solutions to help you boost your productivity. Reach out to us at 810.230.9455 to learn more!