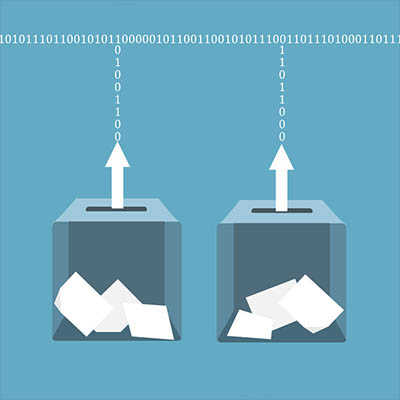 Election Day for the United States is November 6th, and regardless of your feelings regarding U.S. politics, the fact of the matter is that millions of Americans will soon go to the polls and cast their ballots. Unfortunately, what many of them don’t realize is how insecure their voting machines actually are, and how they are potentially putting their vote at risk.

What Most Polling Places Have
The majority of American polling places are operating with equipment that is fast approaching 15 years old. For reference, here’s a brief list of products and technologies that haven’t even been around for ten years yet:

One cofounder of nonprofit group Open Source Election Technology, Greg Miller, puts it this way: “You have equipment that was introduced in 2005. In that time frame, how many times have you changed your mobile phone? And how many times have we replaced our laptops?” In short, the American voting system is reliant on, as Miller described it,”… obsolete hardware [and] software that relies on a diet of spare parts.”

The other cofounder of the nonprofit OSET, John Sebes, has demonstrated just how vulnerable these systems could potentially be to manipulation.

Most polling places collect all of the voting data onto a piece of portable media, like a CD or a USB drive, and bring it to a separate location to be tallied. Unfortunately, the machines used here are also usually outdated, as is the software used to process the results of the vote.

In a live demonstration on a national news network, Sebes used one of these machines to tally votes for two fictional candidates, Thorfer and Varda. In the example, Thorfer had won in a landslide with over 3,000 votes, the opposing Varda only receiving 100. However, with a very simple malware, Sebes was able to just switch the tallies, making “Varda” a fraudulent winner – and while access to these tallying computers is secured, some may not be secured as well as others are.

Furthermore, many polling places maintain a paper backup of the vote, just in case there needs to be a recount, but there are also many who have no paper backup at all. This includes some states known as “battleground” or “swing” states, where a much smaller number of votes can potentially have a significant impact on the final outcome.

How to Minimize the Issue
Unfortunately, the easiest solution to this problem is also impossible. One would think that there would be a singular set of standards for all polling places to abide by – but since the American Constitution specifies that each state is in control of its own electoral procedures, this consistency is effectively made impossible.

However, there are other ways that have been suggested to protect voting technology… some of which are decidedly lower-tech.

Temporarily Eliminate Online Voting
Some states have made online voting available, primarily to service members or other citizens who may be abroad, and many allow email ballots to be submitted. However, until security is improved for these methods, it has been suggested that they are suspended.

Utilize Physical Backups
Yes, we know. We generally say that all of your backups should be saved to the cloud, but in this case, that would be counterproductive. After all, a physically-generated paper backup that records each vote isn’t hackable (unlike a digital system) and could easily be used to cross-check any contested results.

Invest in Improved Voting Equipment
As one might imagine upon hearing that most American voting machines are over a decade old, updating the infrastructure that enables the prime responsibility of democracy is clearly not a priority for those dispersing the funds. It has been suggested that Congress get involved, funding research into improving these machines and replacing the problematic older machines, as was last done in 2002.

Americans view the right to vote as a basic human right, so it seems especially bad that their infrastructure can get in the way of their doing so. Don’t let your business technology do the same to your employees and their work. Reach out to NuTech Services for a better solution by calling 810.230.9455.